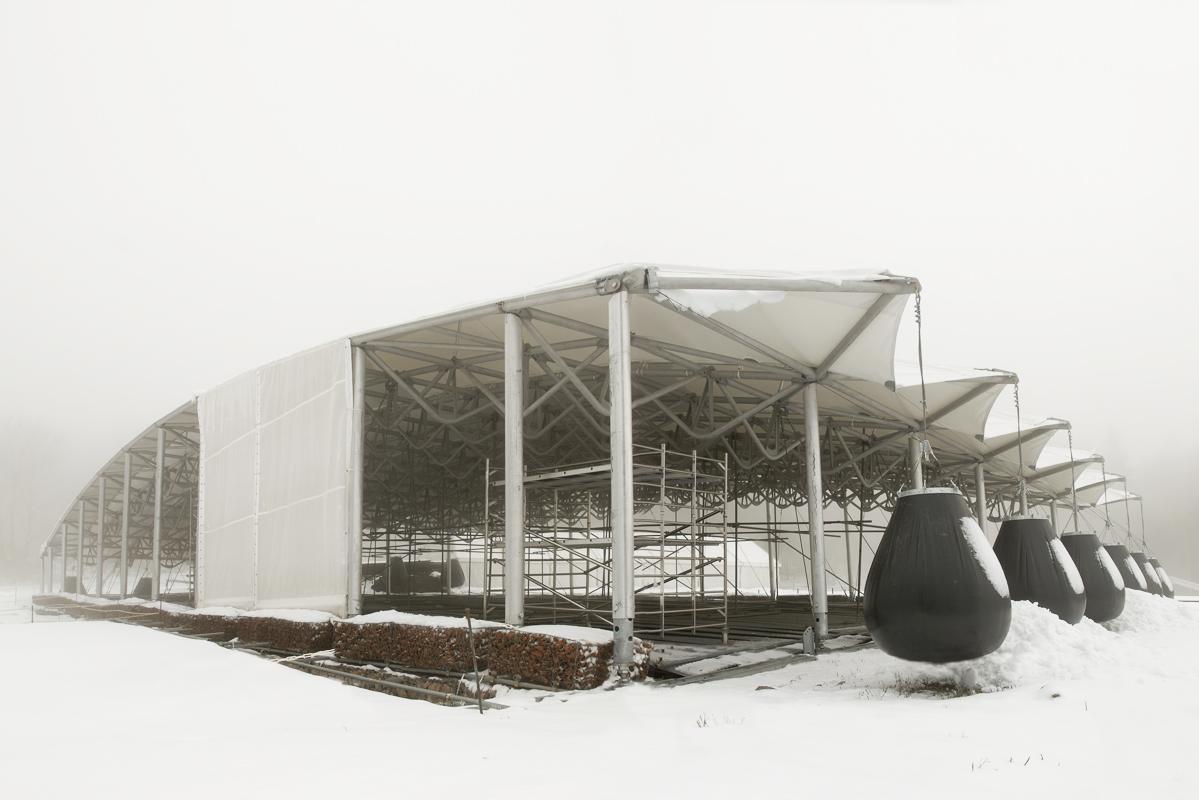 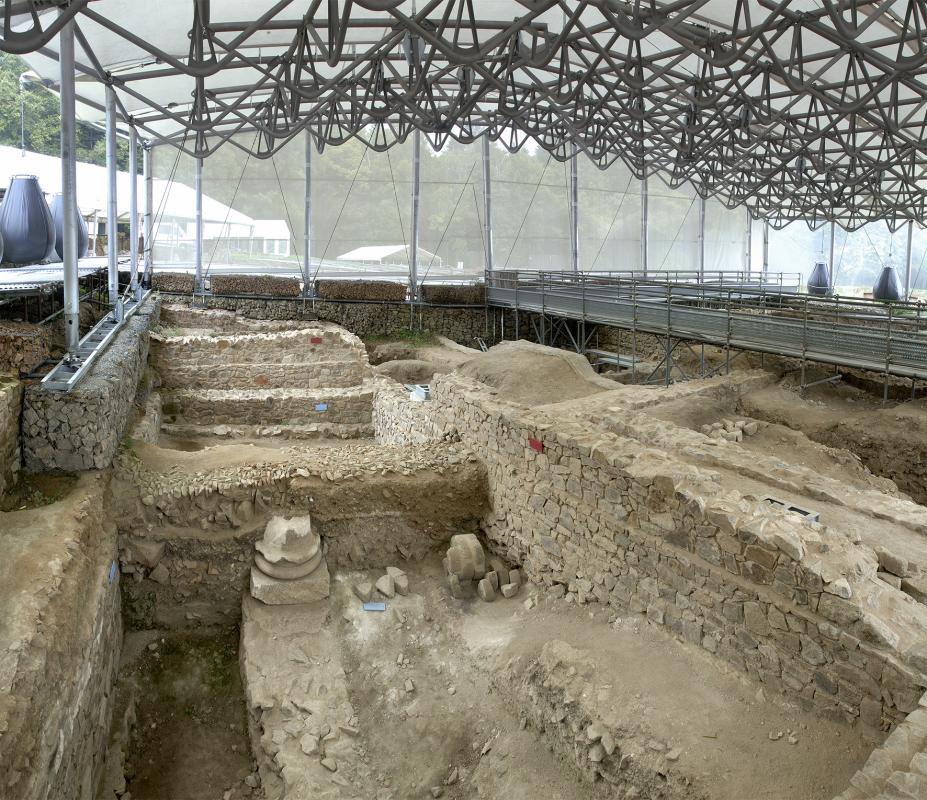 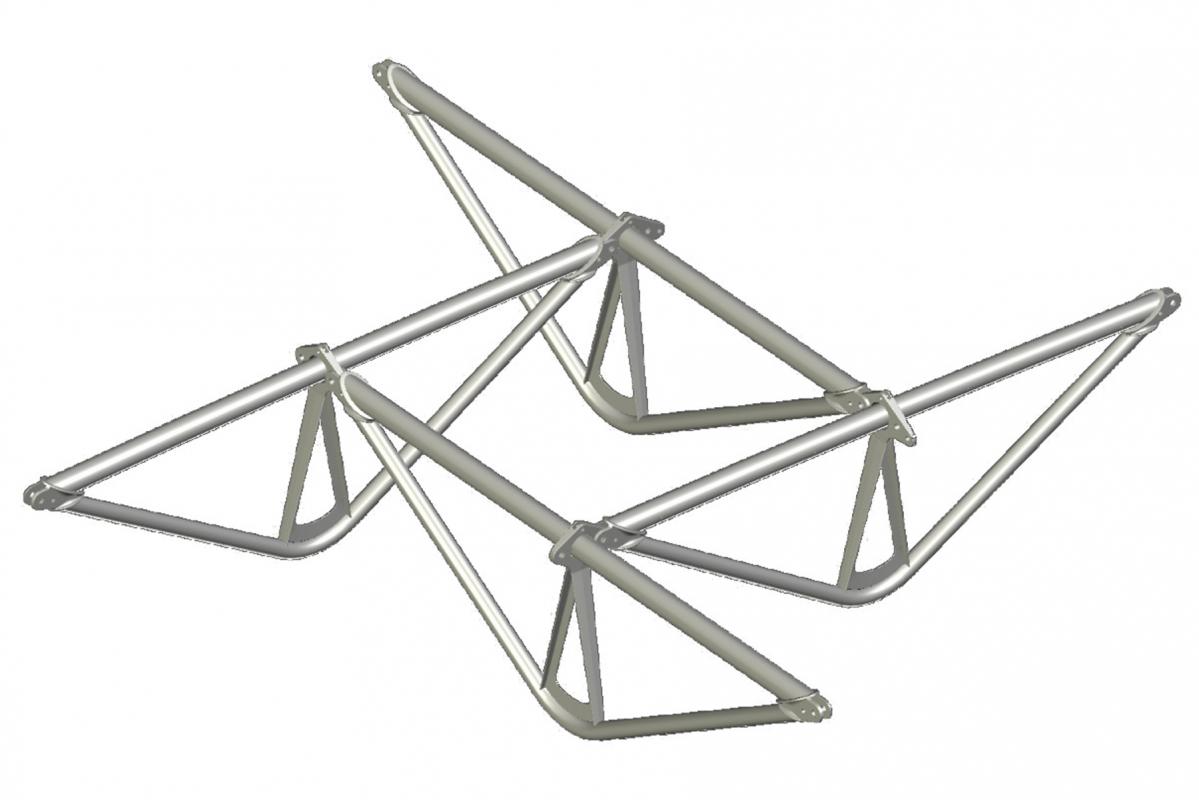 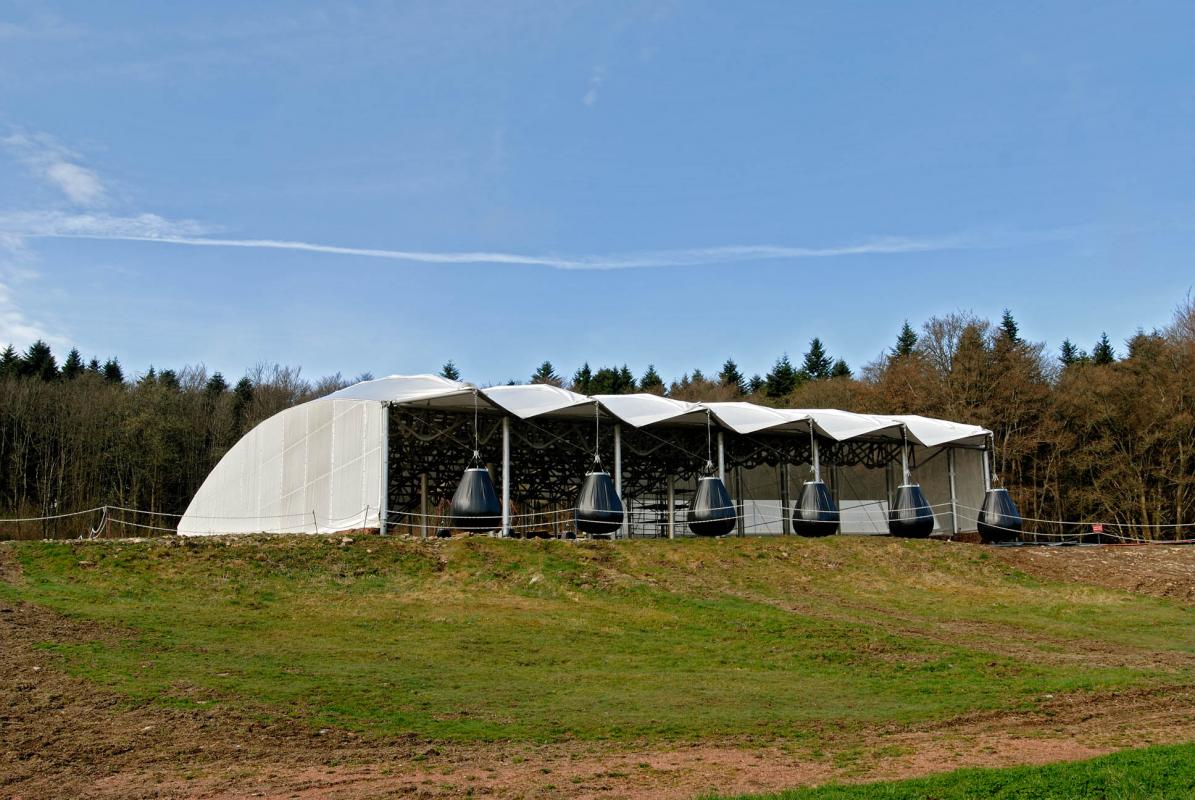 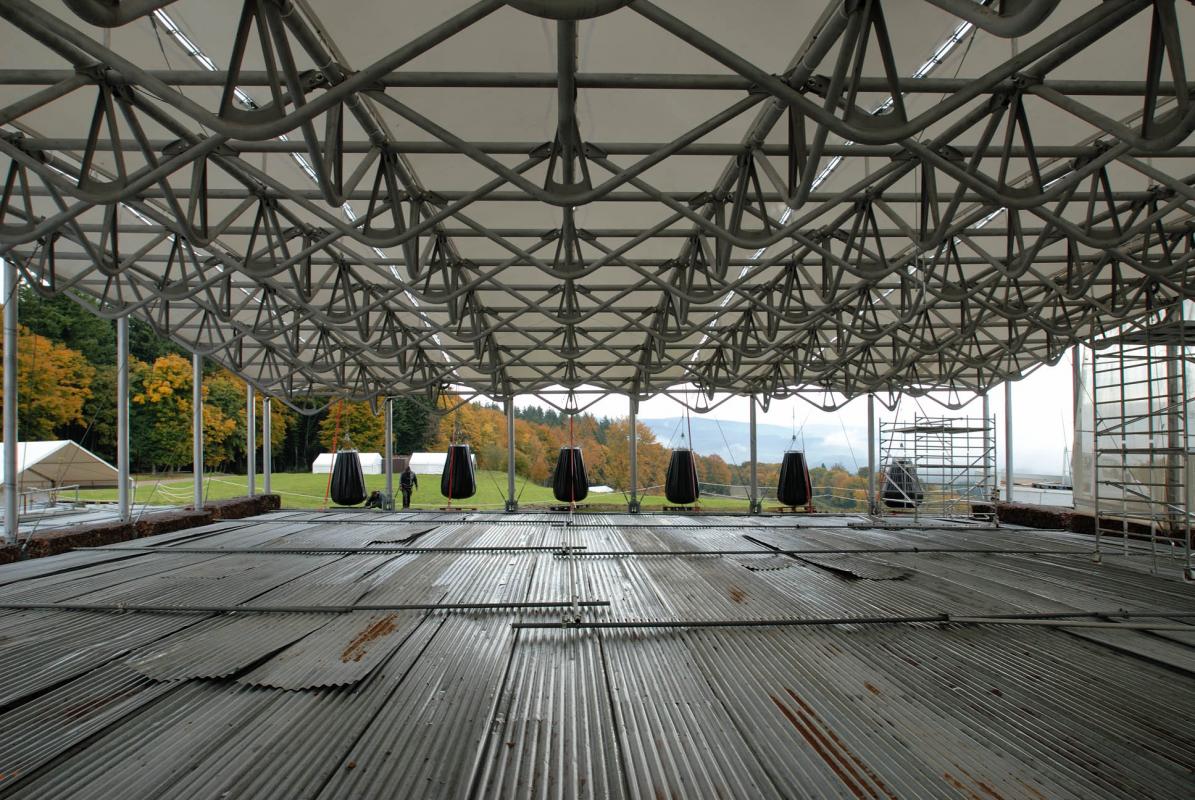 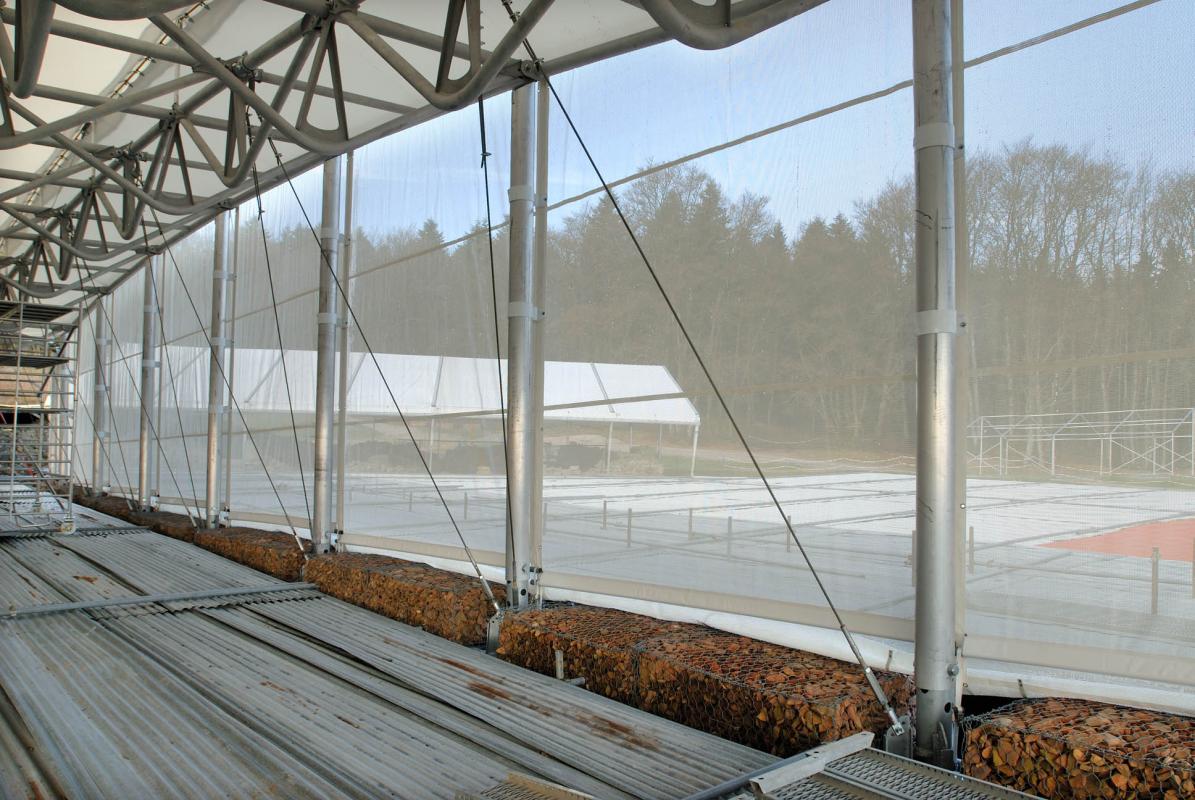 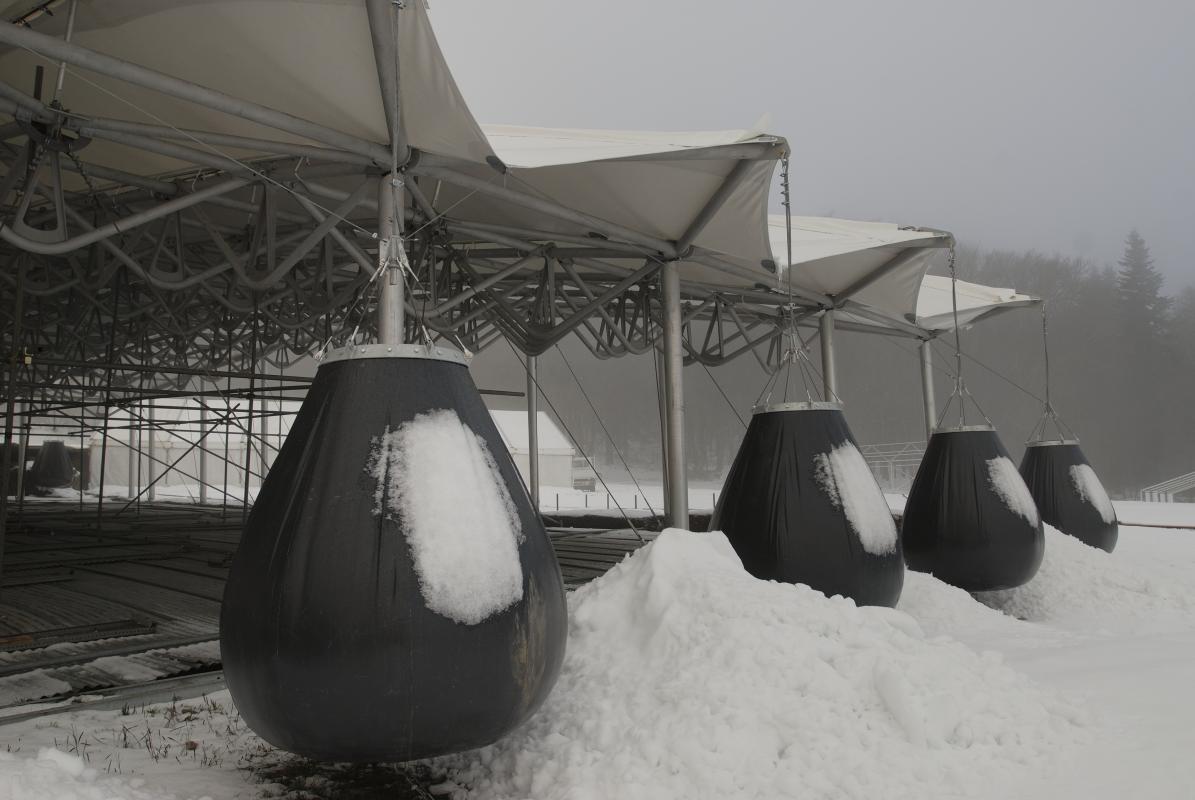 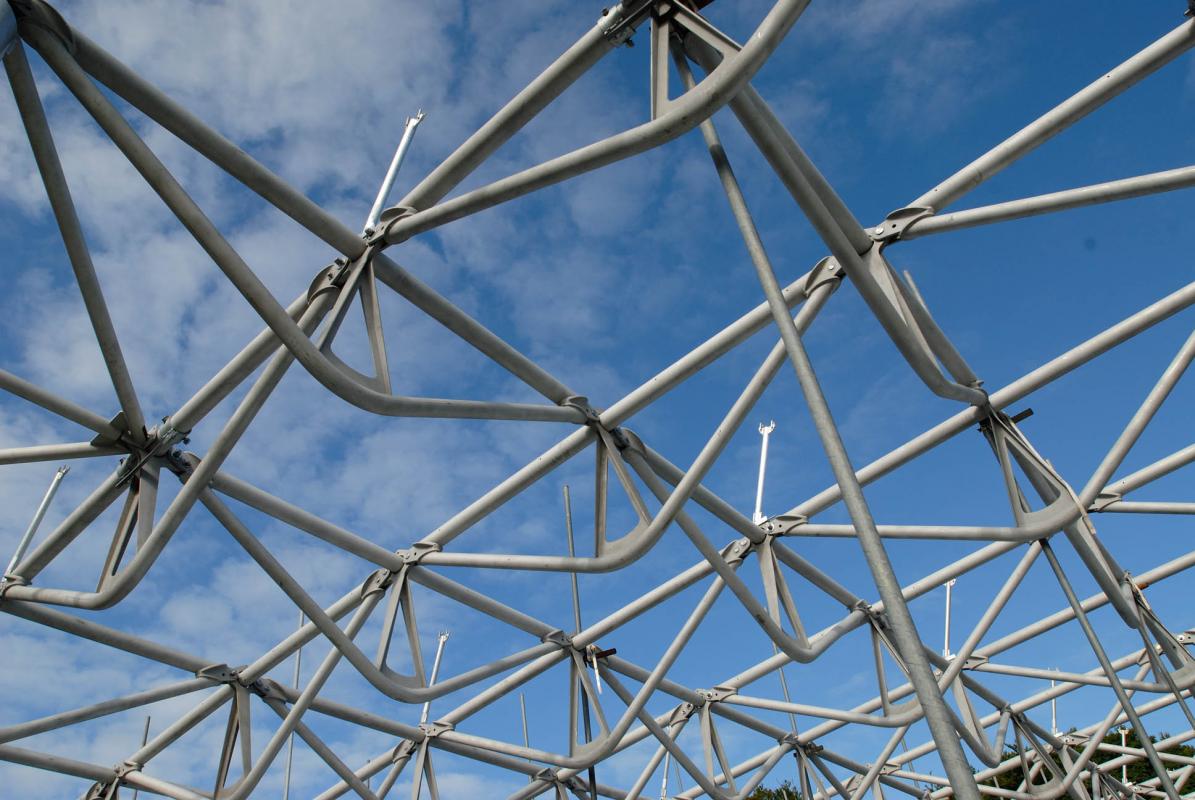 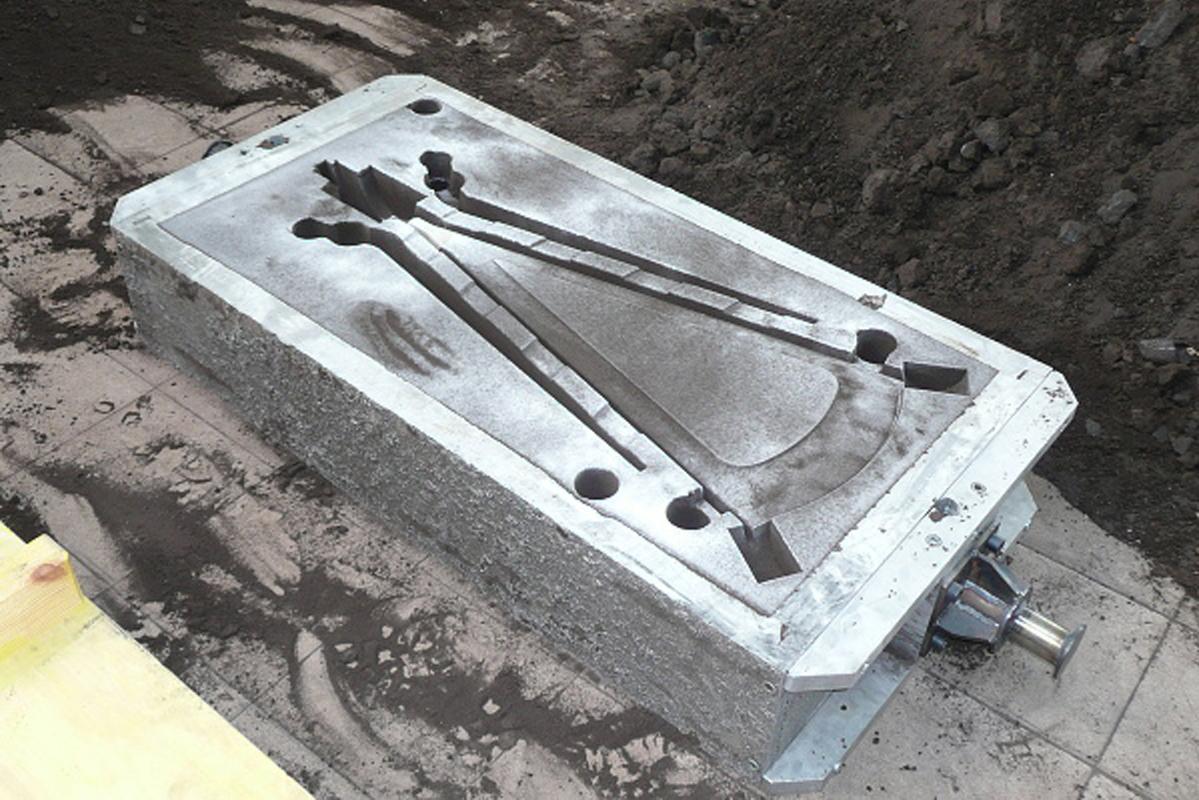 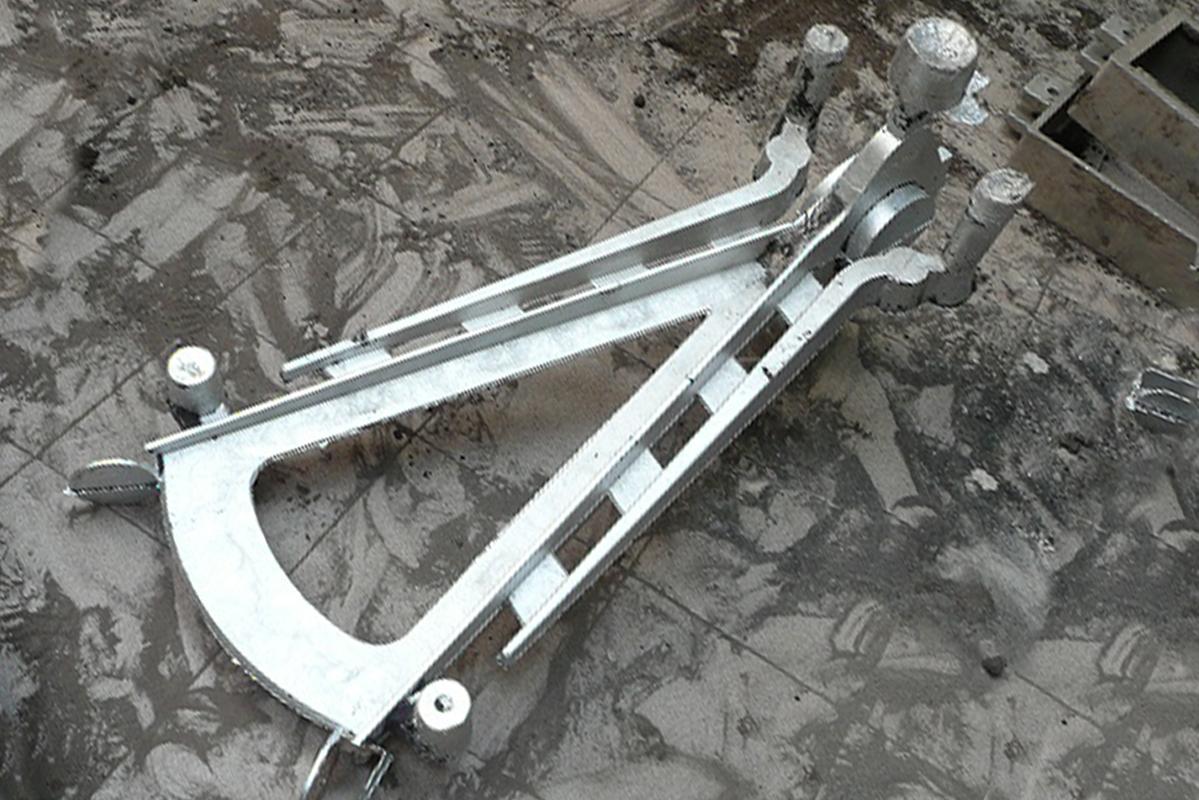 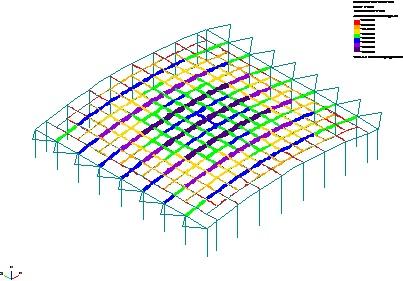 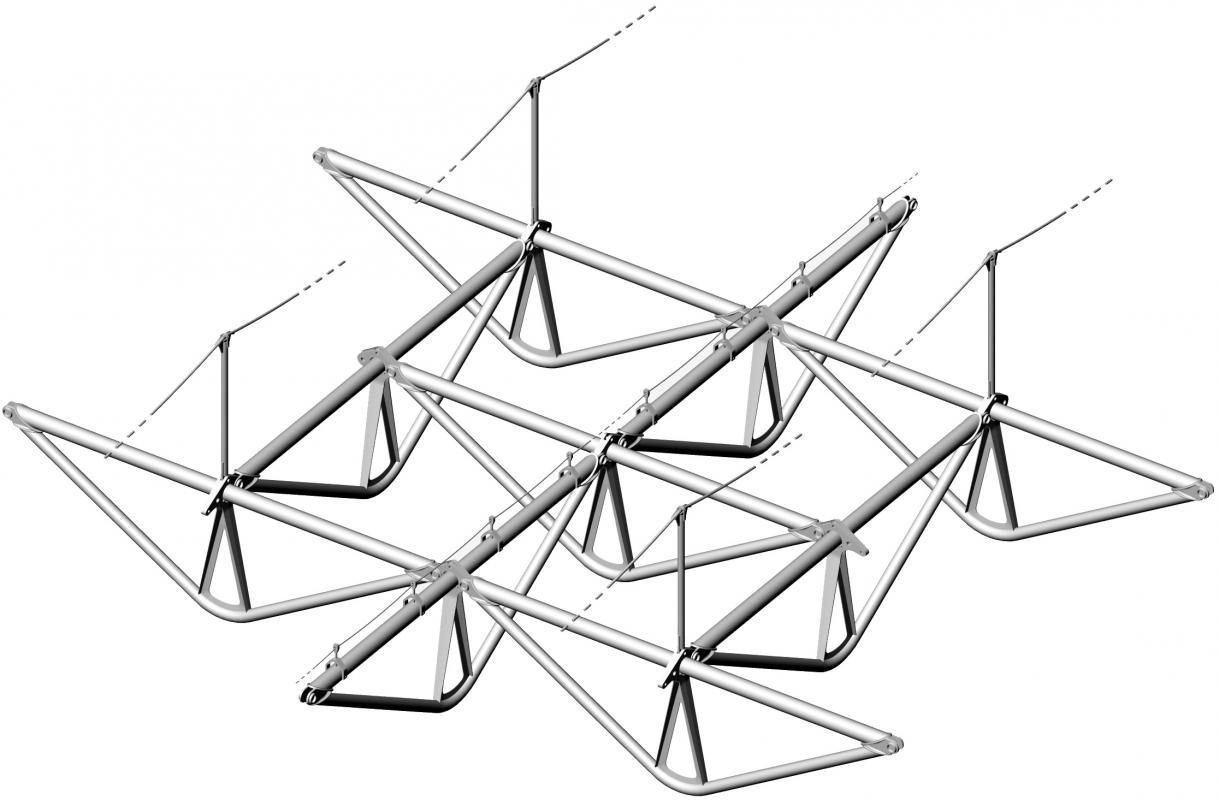 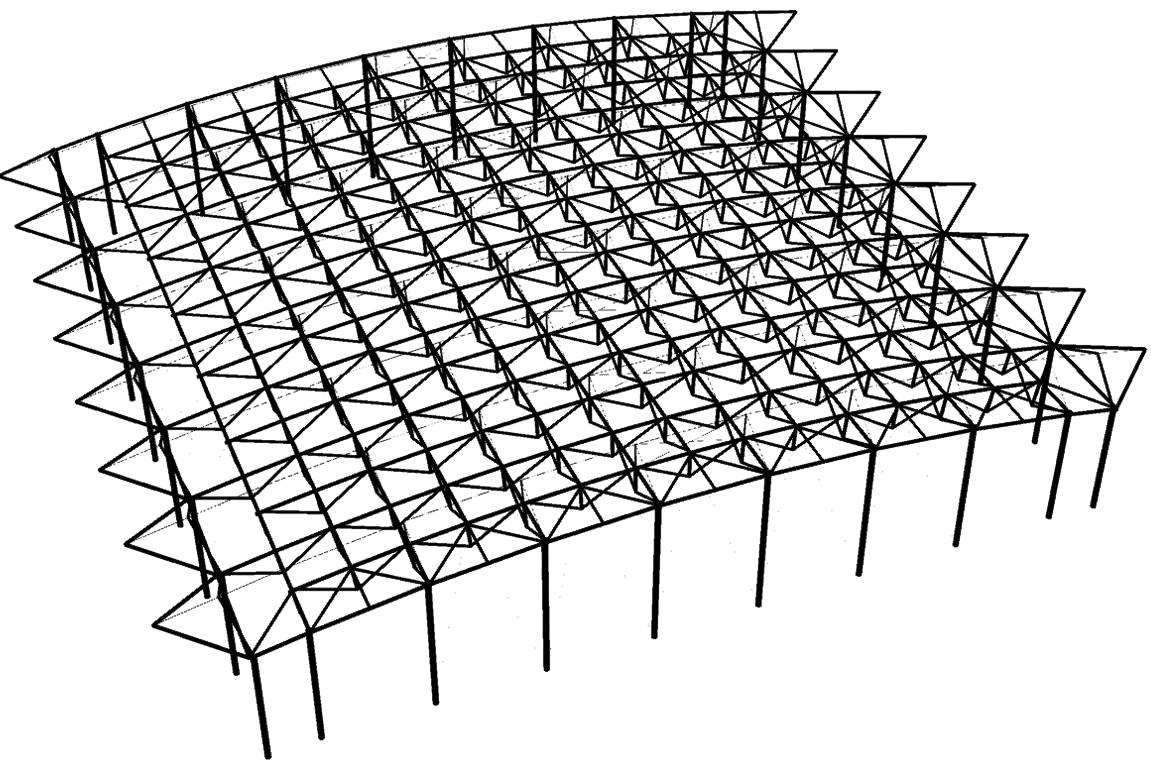 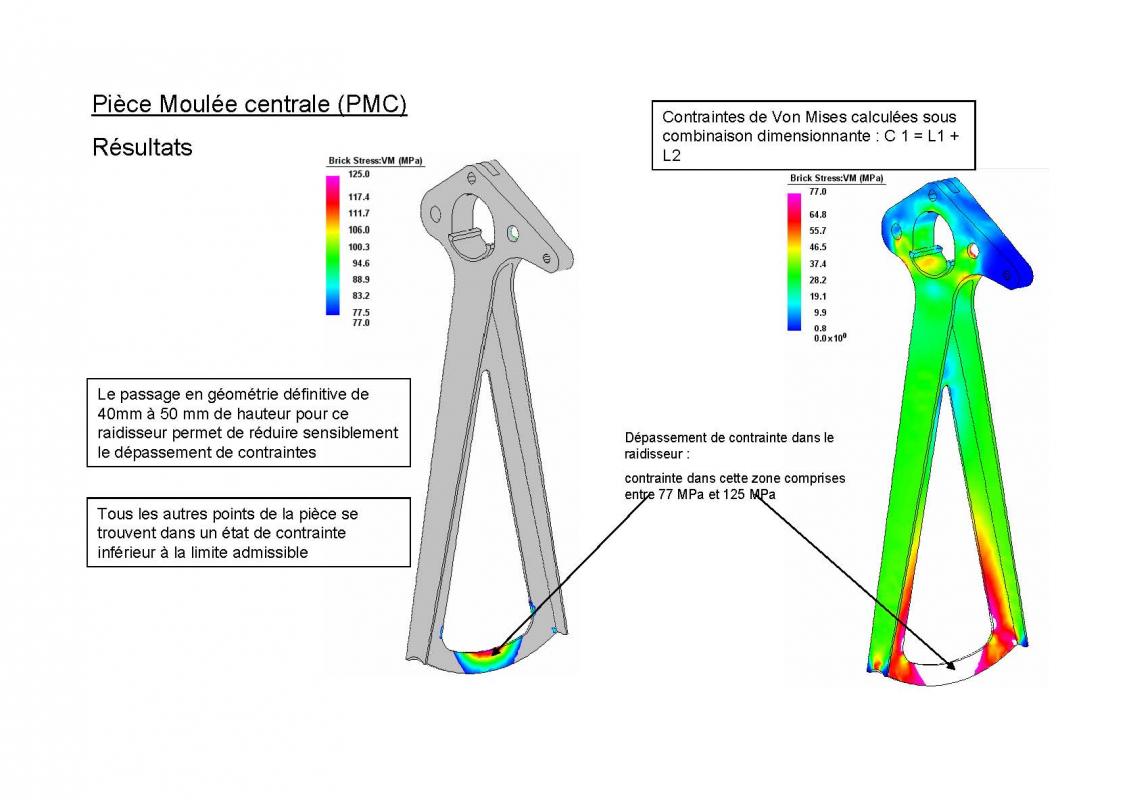 Cover providing shelter for the archeological digs in Bibracte (Morvan)

In 2003 a competition was launched to design a temporary shelter for archaeological digs, adaptable to different sites. The first was to be installed on the site of the Gallic city of Bibracte, on Mont Beuvray in France’s Morvan Regional Natural Park.

The brief required a 30 m span; a structure that could easily be adapted to a variety of forms and erected by untrained teams; and the absence of foundations so as not to risk harming the archaeological remains. Wind and snow loads had to meet the rigorous demands of the region’s frequent hard winters.

To take on to this ambitious program, our team used a rare type of structure: the nexorade. The nexorade consists of a two-dimensional plane, supported only on its perimeter and made up of small trusses that are pinned together. The alternating overlapping in plan of the truss modules ensures the out-of-plane stability of the structure. The basic module is a triangular element composed of aluminium tubes and castings, 3.75m long and weighing 43kg. This type of structure was particularly advantageous in its ease of manipulation (manageable by just two people), by its total modularity, and in that it allows for settlement of individual bearings.

The cover consists of a white canvas of polyethylene fibres with a PVC coating. Instead of having solid foundations, the structure is ballasted to prevent it from being blown away by the wind uplift. On two sides of the structure gabions filled with broken amphora, found in quantity in the digs, provide the ballast. On the two other sides, huge wineskin-shaped canvas sacks filled with earth maintain the tension in the canvas via the ridge cables. It is these unusual black forms that constitute the overriding architectural image of the project.