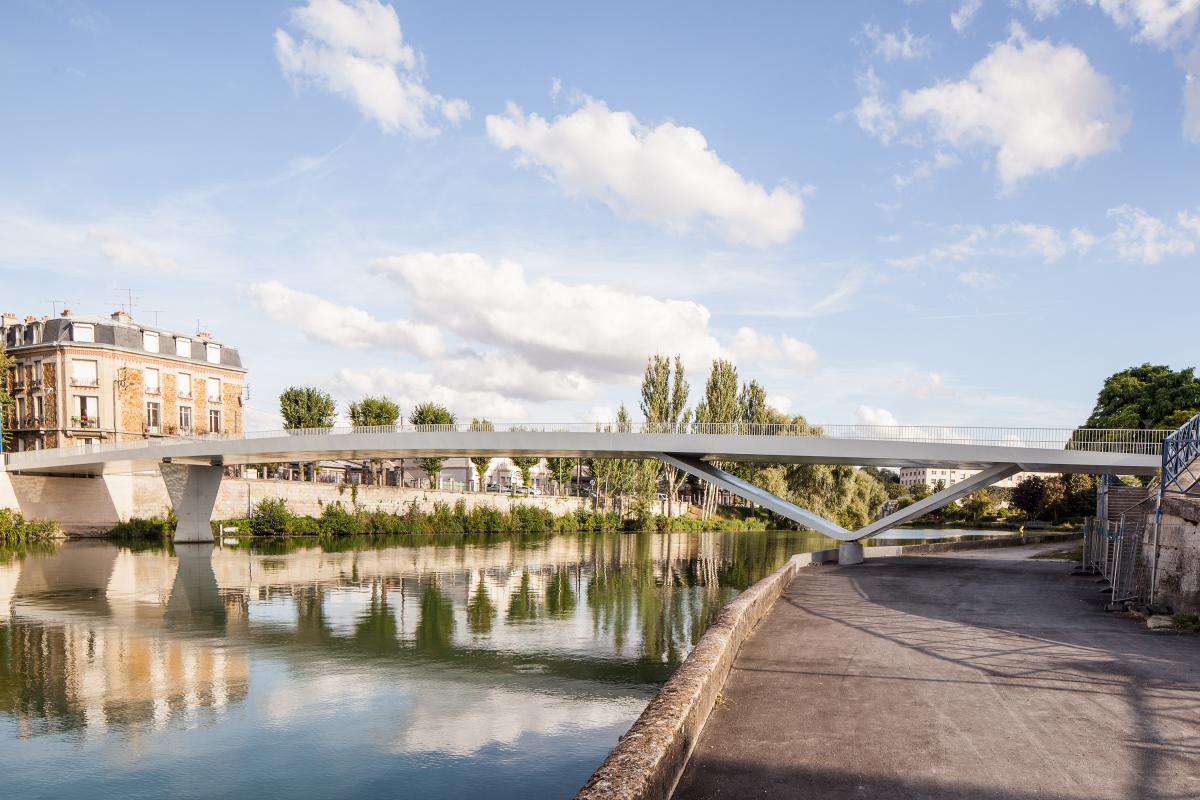 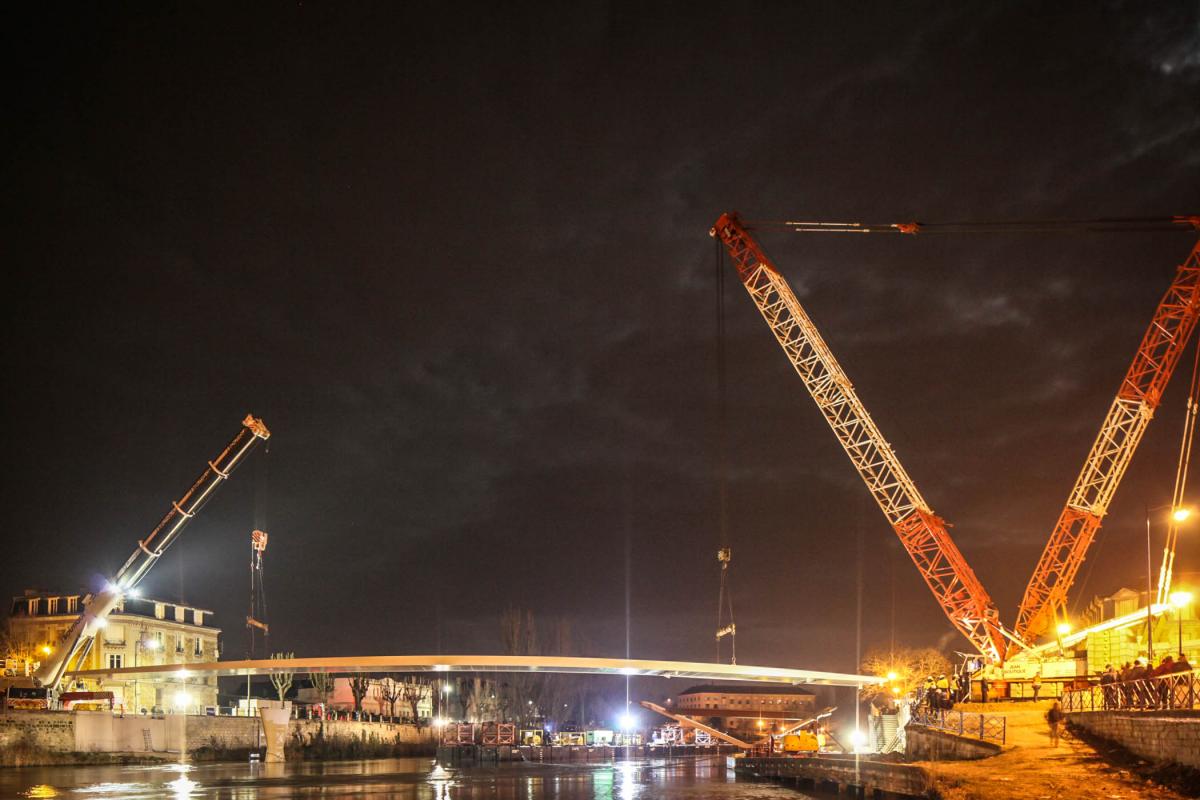 Hoisting of the bridge deck by night. 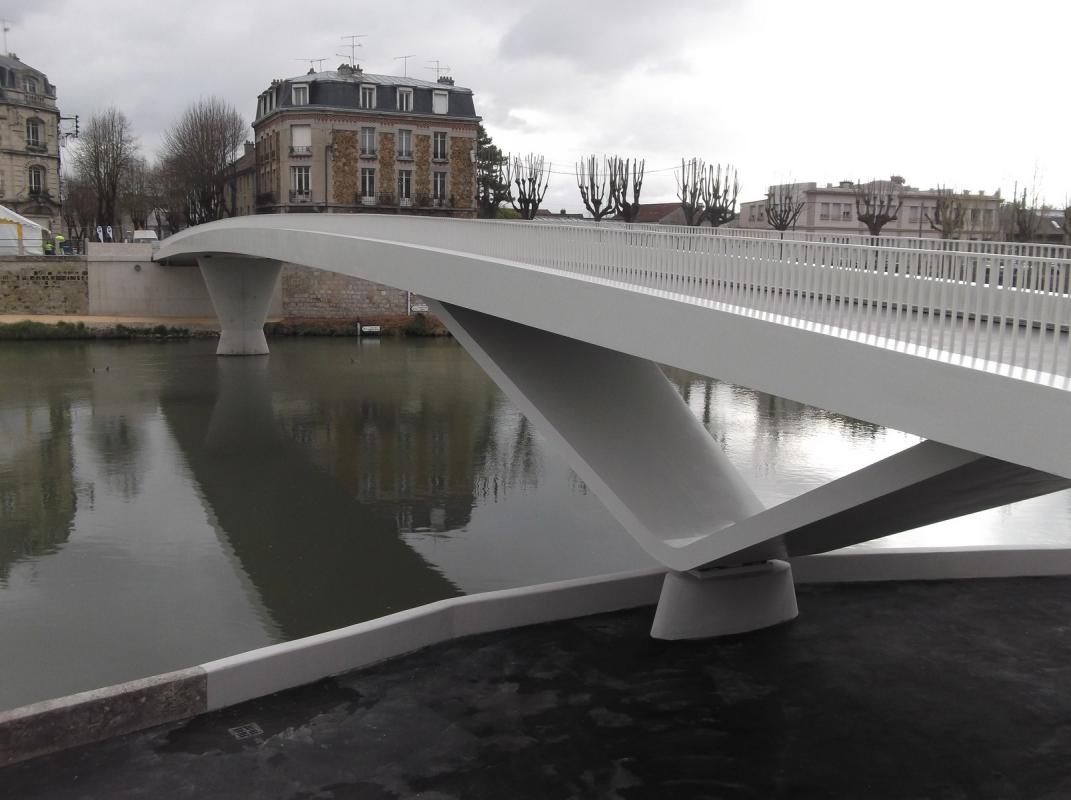 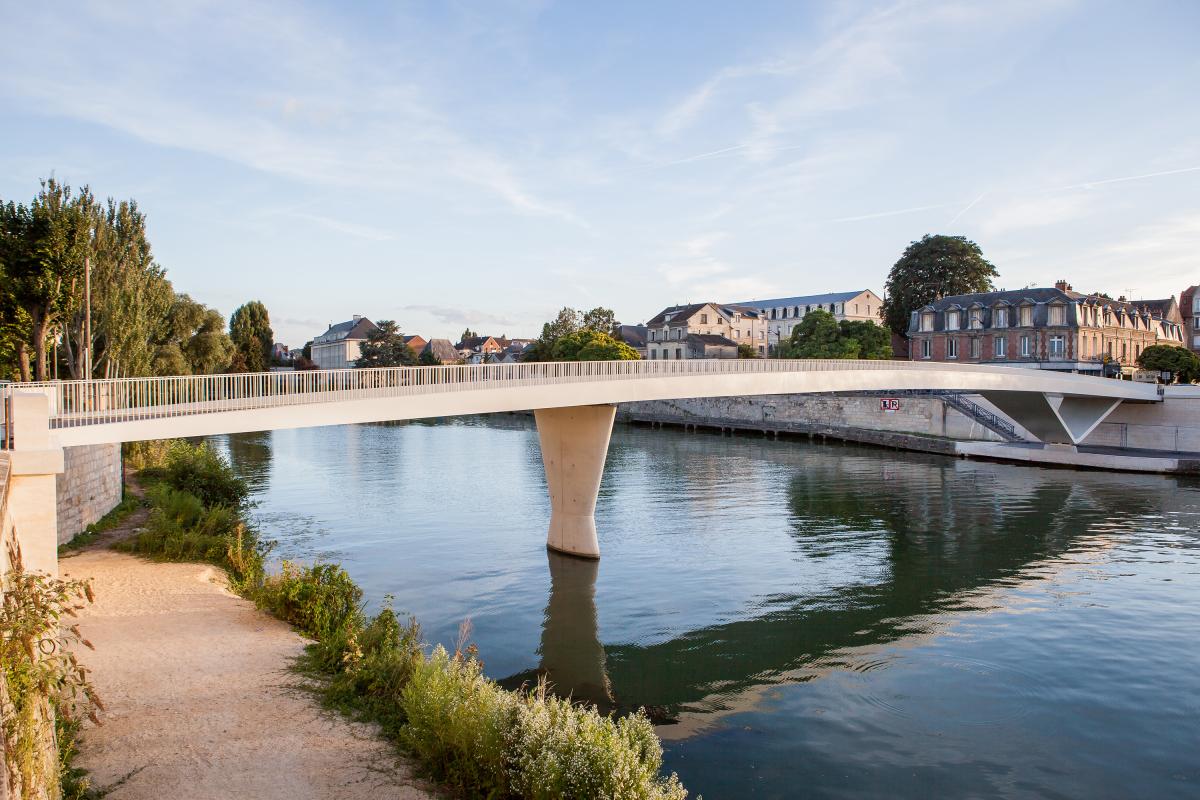 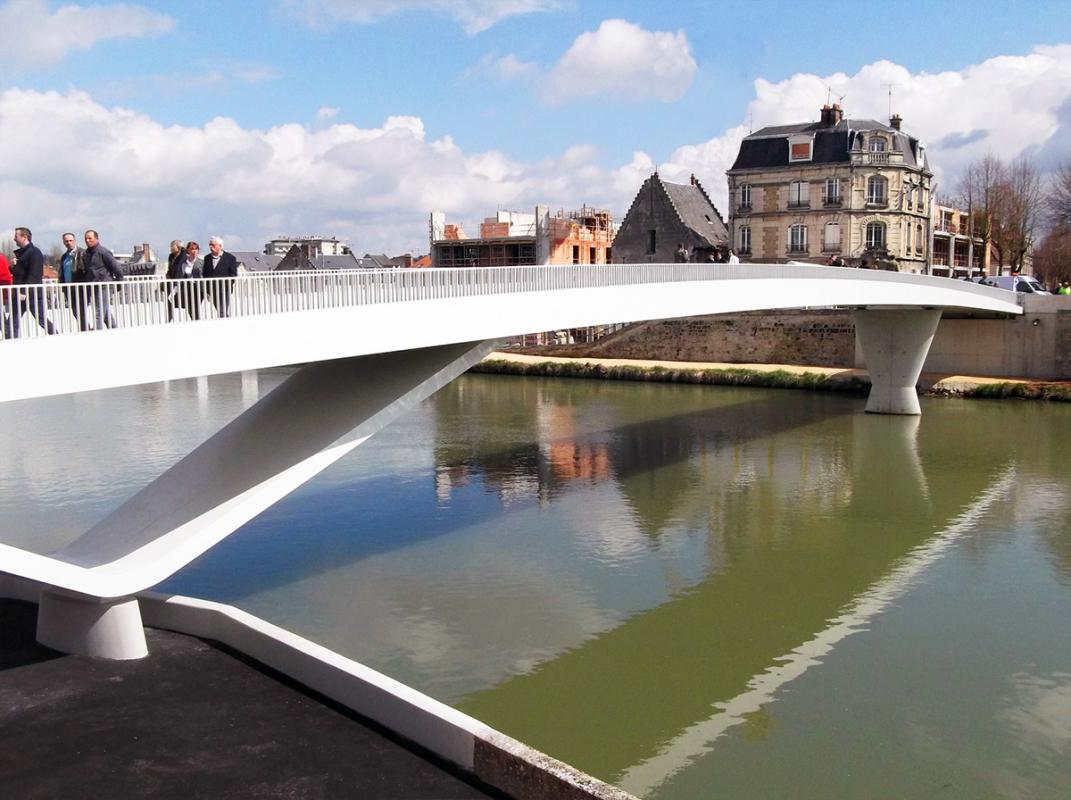 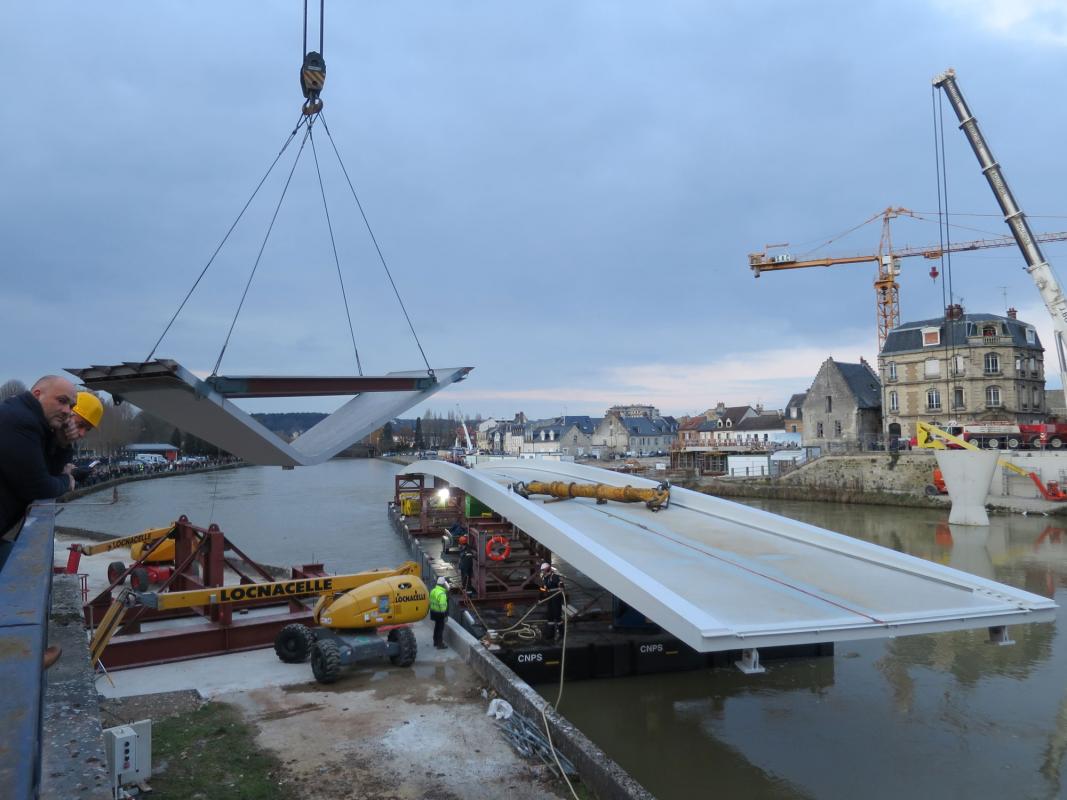 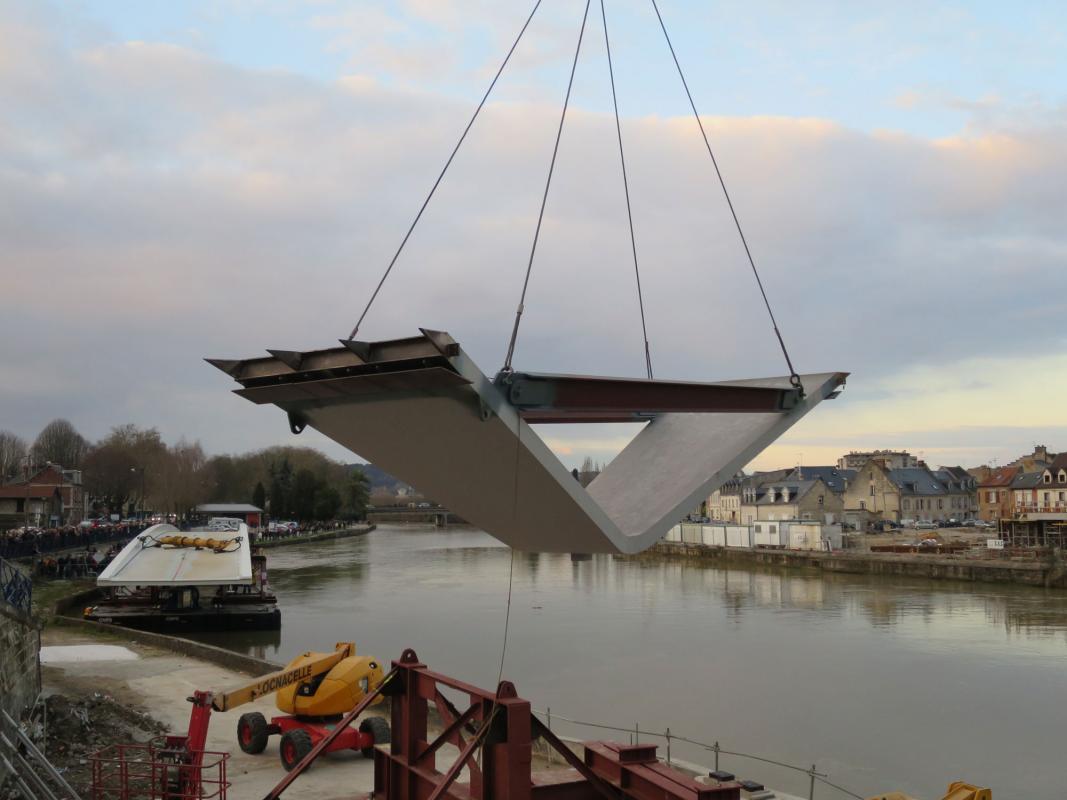 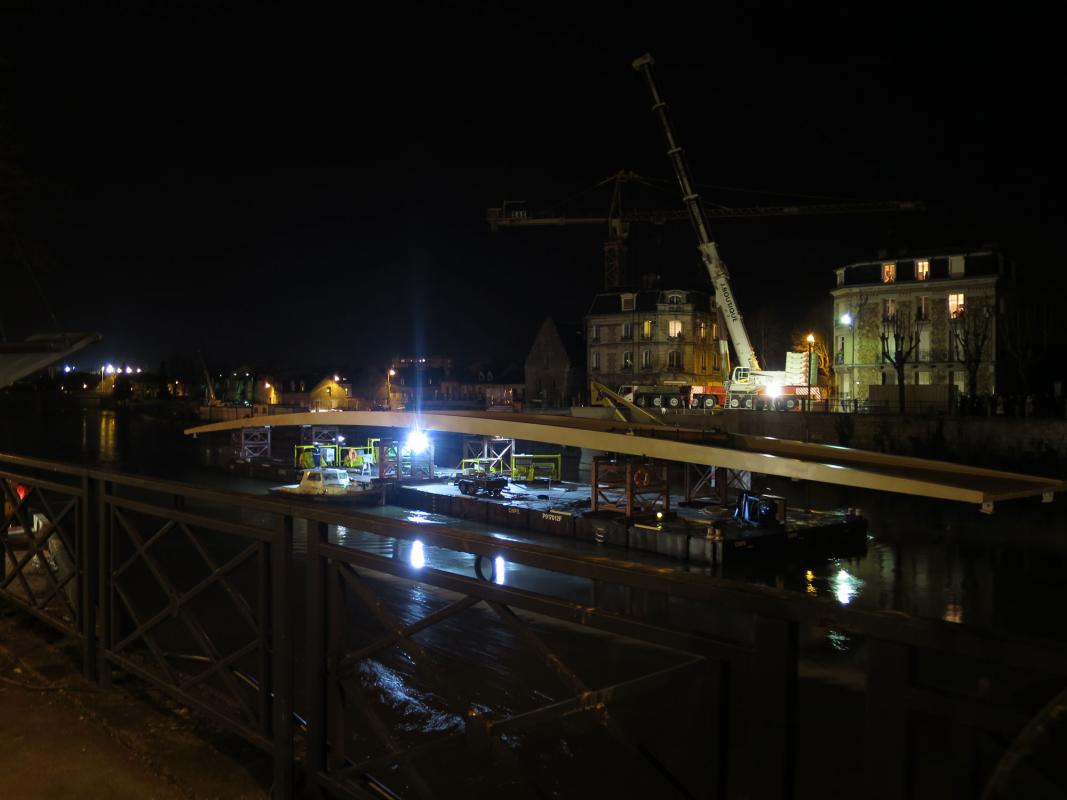 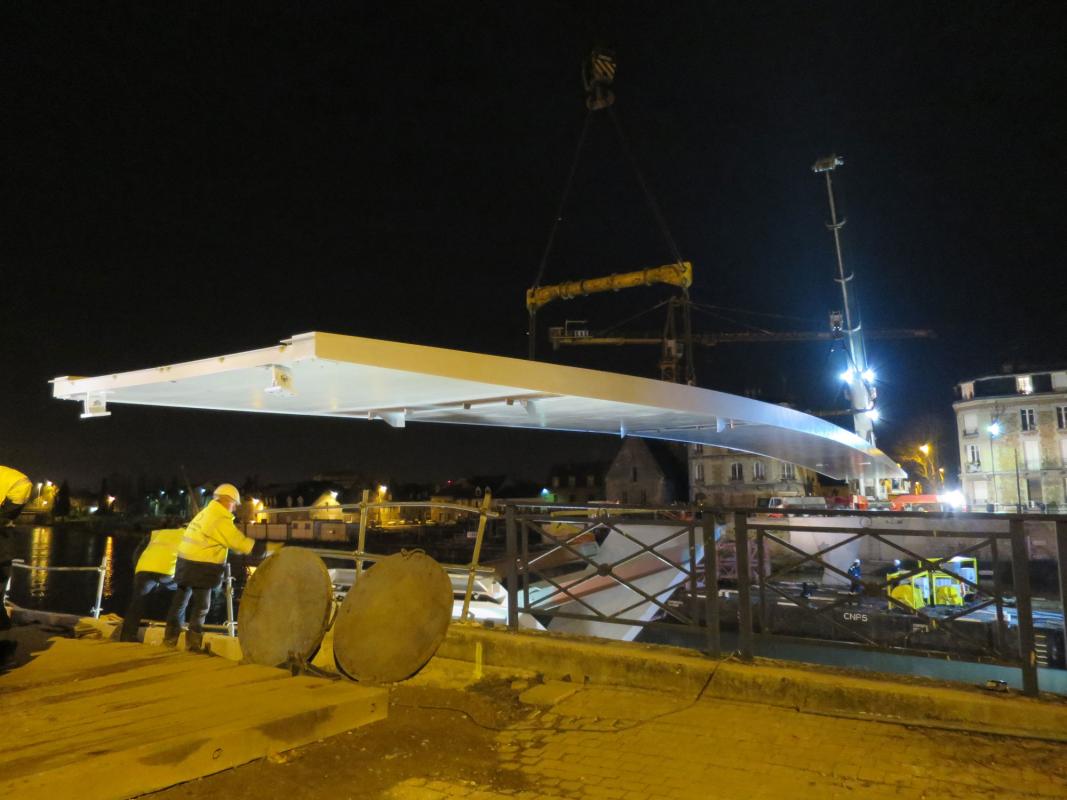 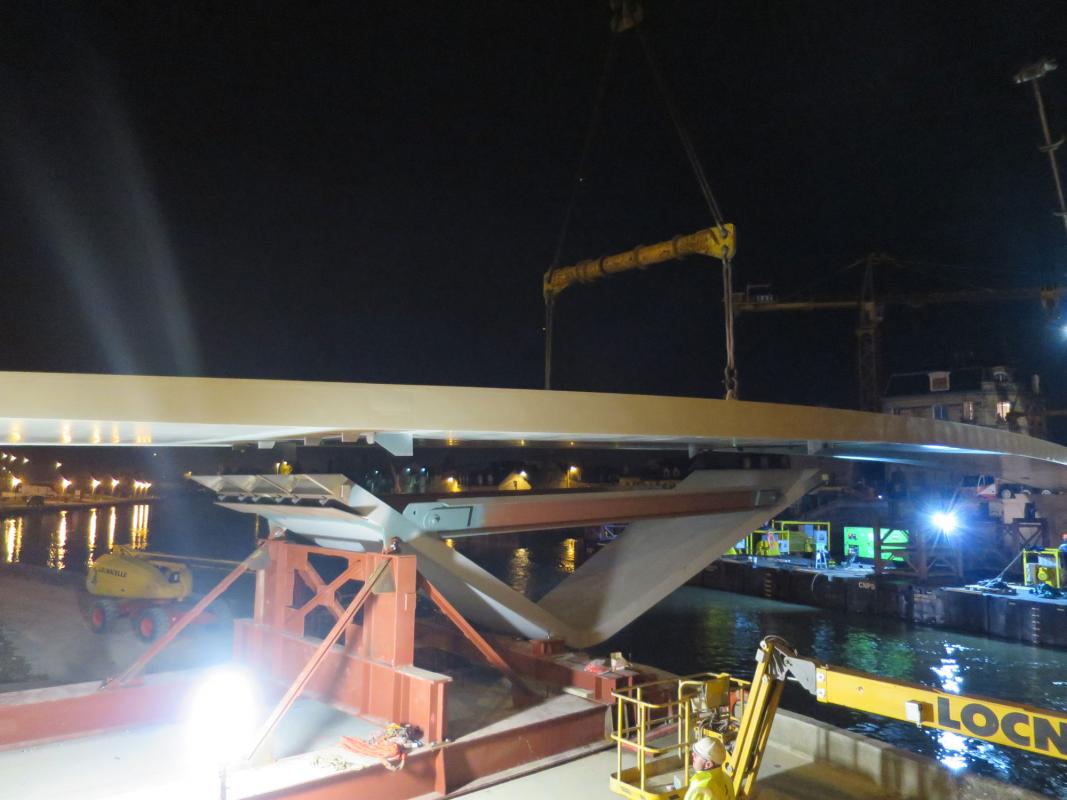 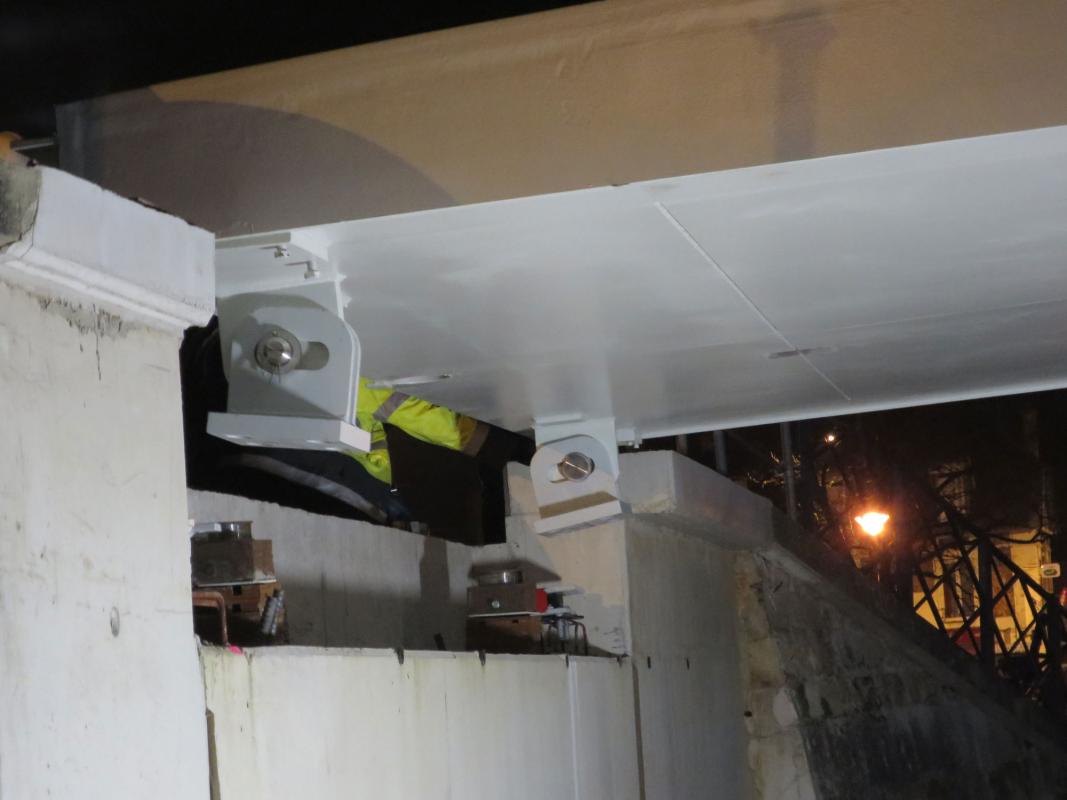 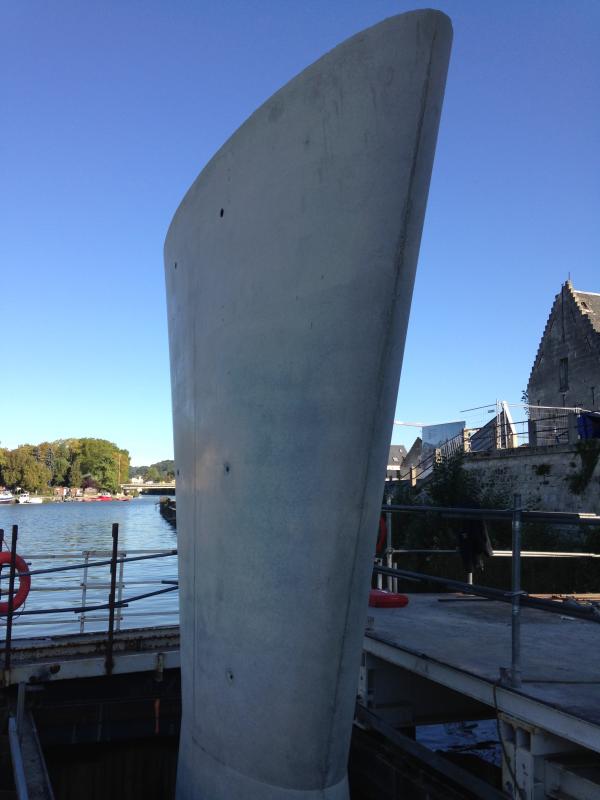 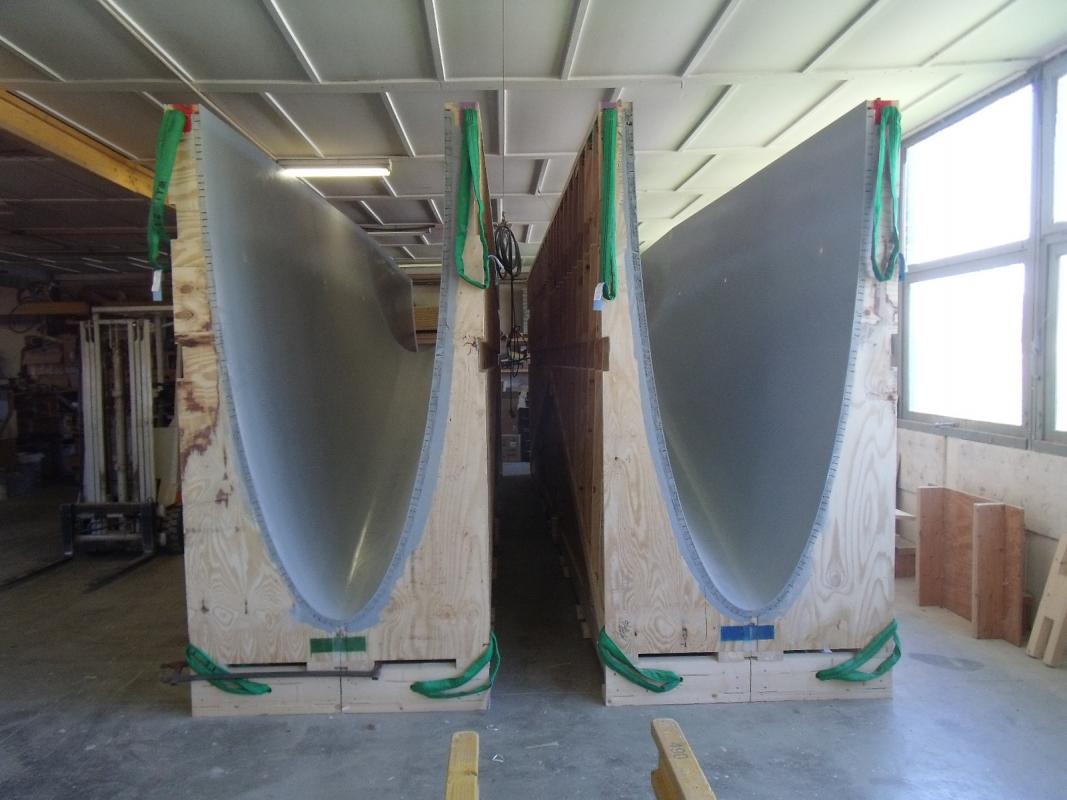 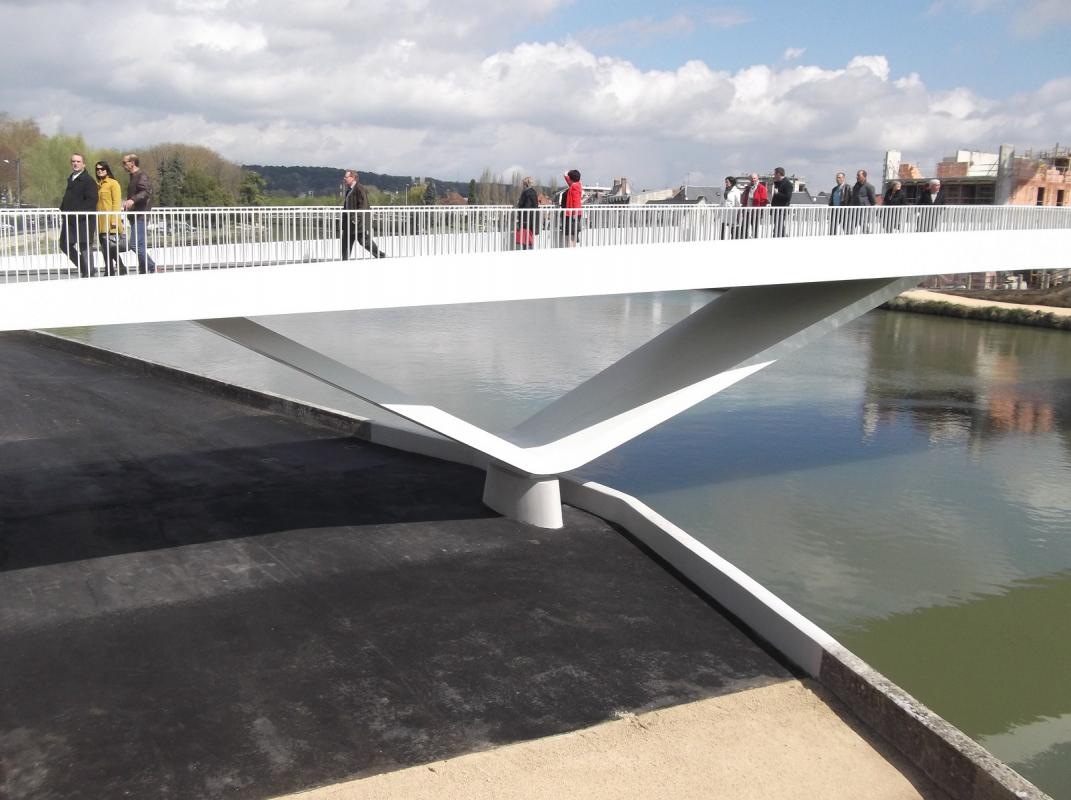 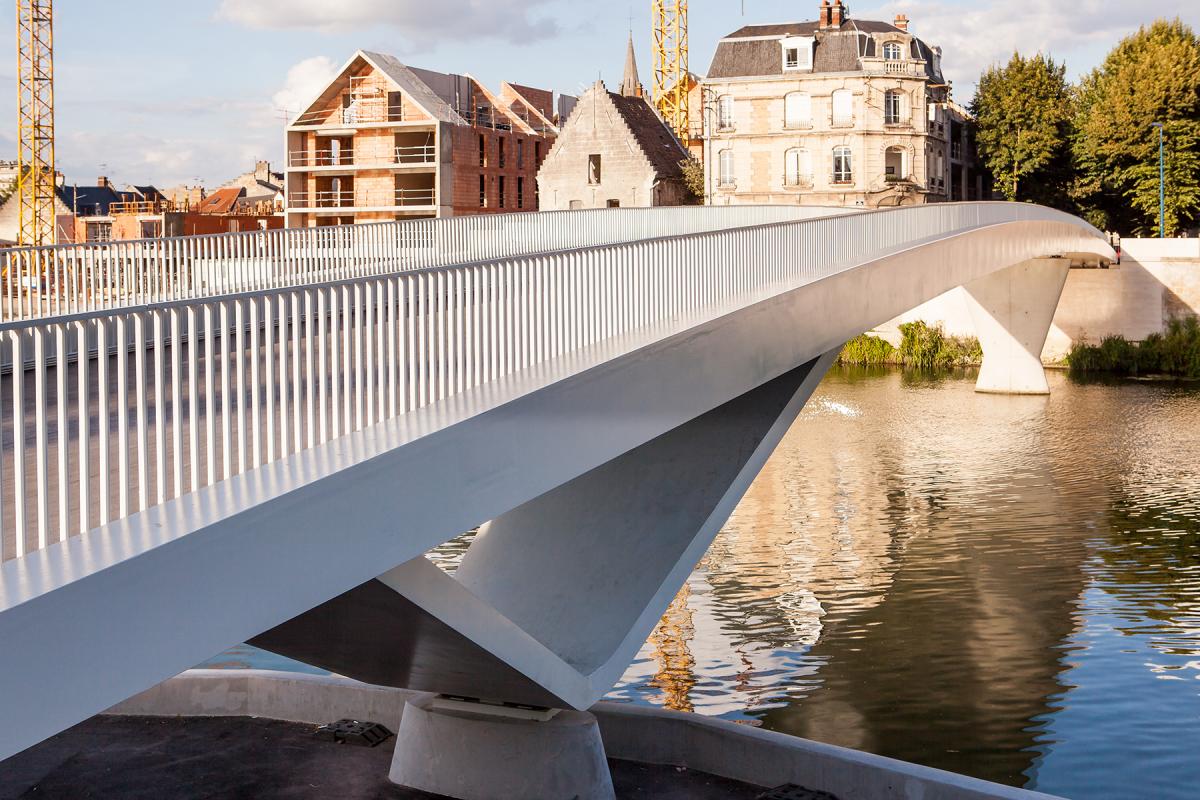 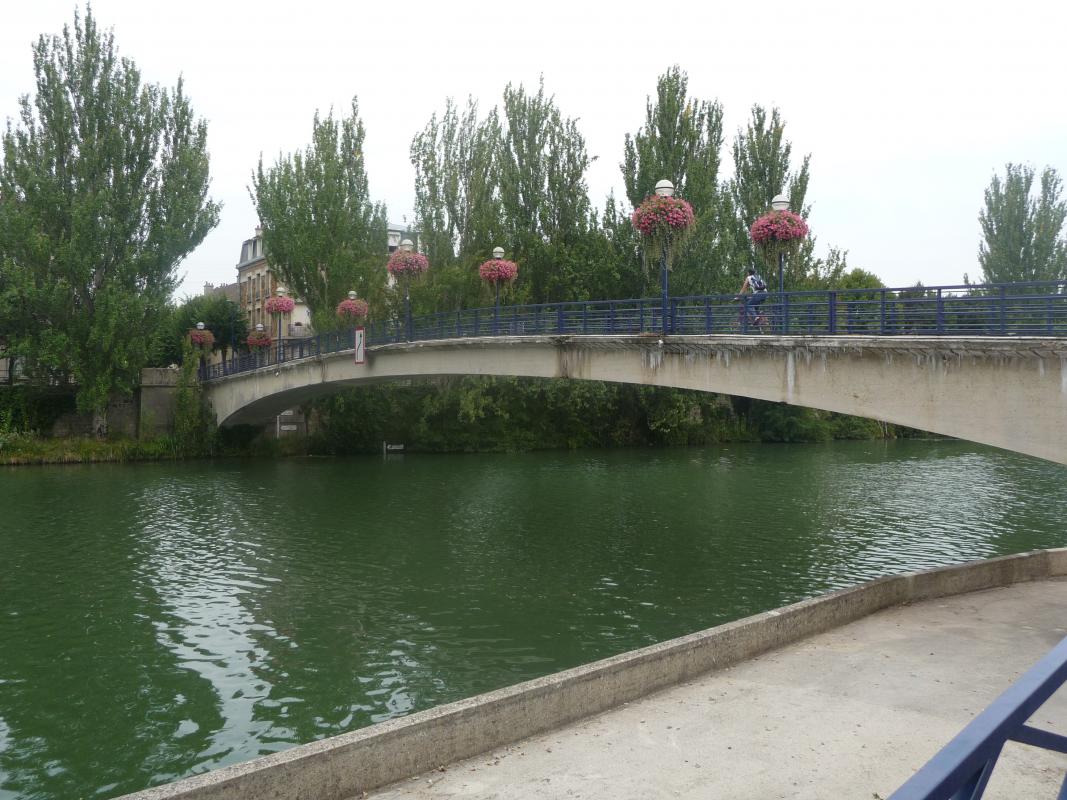 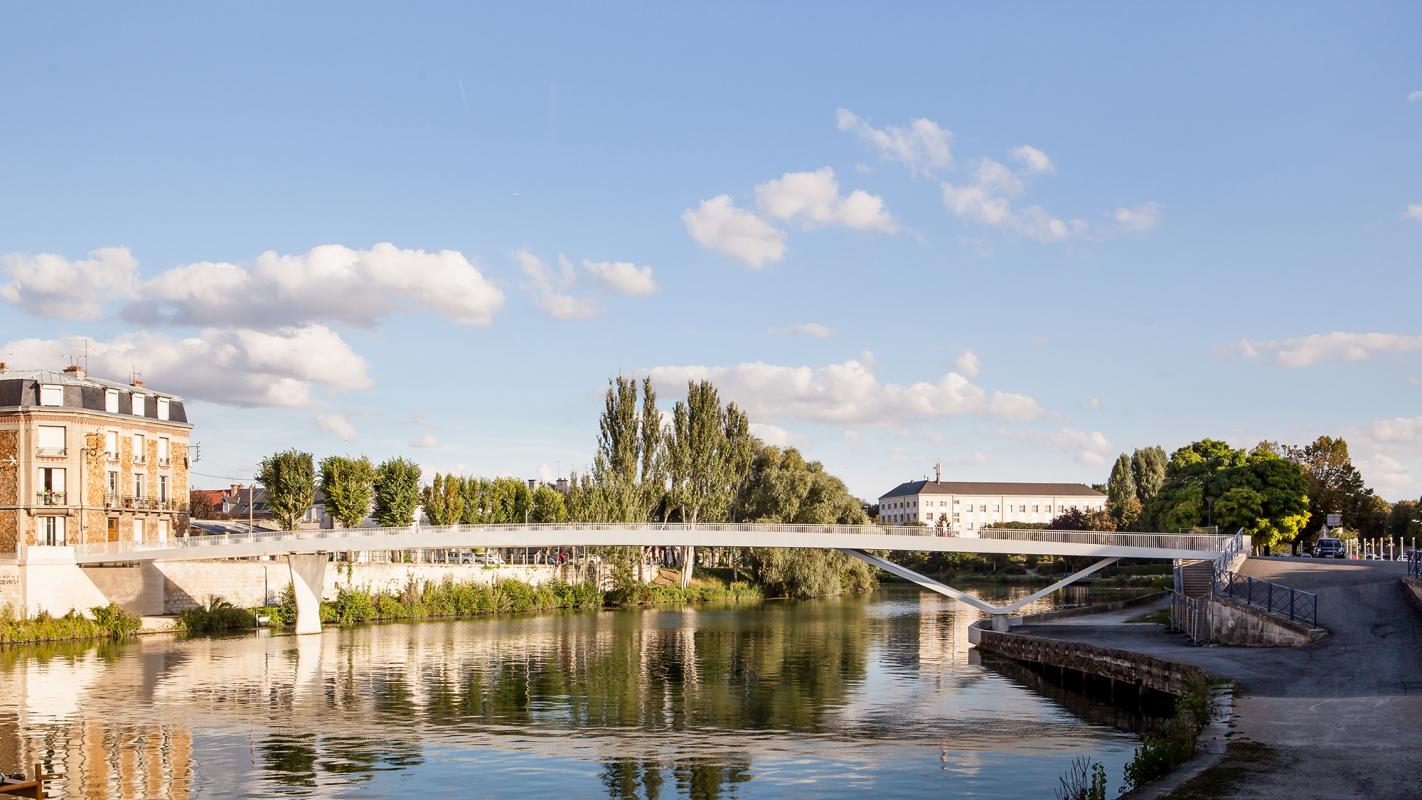 Demolition and reconstruction of the footbridge crossing the river Aisne

Early in its history, the town of Soissons built a bridge to link the old town with the Saint-Waast neighbourhood on the other side of the river Aisne. The current footbridge was built post-War to replace an earlier, 19th-century bridge that had been destroyed during Allied bombardments. Funded by the British (hence its name), this footbridge was beautifully designed in reinforced concrete, but its condition had seriously deteriorated, prompting the decision to rebuild it.

This project is part of a larger programme to redevelop the banks of the Aisne. The project aims to construct a bridge in the spirit of the pre-War bridge, that is to say more urban, wider and flatter, and that fits into the continuity of the roads that it joins. The client’s team proposed that the bridge should be simple and elegant, with no visible structure above the deck.

The project is born of this architectural aim, while also taking into account the double imperatives of access for persons of reduced mobility and sufficient headroom to maintain the navigability of the river Aisne. We sought to keep the bridge deck as slim as possible above the navigable channel, which led us to put two pylons in the river. This gave a structural span of 45m for an overall crossing of 60m between the riverbank walls. With the same objective, we decided to make the bridge deck in steel.

On the right bank, the Saint Waast side, an assertive concrete pylon, ellipsoidal in form, rises up to meet the bridge deck, in direct support. On the left bank, the stack support is hidden within an existing embankment. The bridge deck is supported by two steel arms in the form of an open V. This bearing firmly stabilises the footbridge.

The bridge deck itself is made of two parallel girder box beams, linked by floor beams every 2 metres. These support the steel decking, which is coated in resin. The underside of the bridge deck is clad in continuous sheet metal soldered to the floor beams.